Griffith BlackCats Basketball is a boys youth recreational basketball league that has been in existence for over 25 years. Grades 1 thru HS. Our goal is to provide a basketball league that is fun and educational, provides the structure and accountability of teams sports and teaches sportsmanship and team play in a fair and relaxed environment. We don’t have a lot of AAU players in our league. We are more of a pure town recreational league.

Players are welcome from any neighboring community that want to play. We do no accept ‘teams’. It is individual sign ups and a league draft is held by division in mid-December. Our games are played on Sundays starting in early January and finish in mid-March in the Griffith HS Field House. We play an 8 game season and a season ending tournament.

We organize rosters/divisions by grade:

First/Second (no score is kept, only practice/play on game day)
Third/Fourth (competitive, score is kept, teaching the basics of the team game)
Fifth/Sixth (competitive, intensity picks up a little, usually our largest division by number of players/teams)
Seventh/Eighth (competitive)
High School (in it’s third year, for guys that still want to play but didn’t make their HS team) 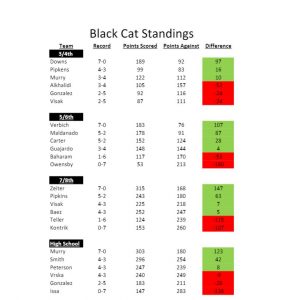 Here are the times for the draft/evaluations on December 11th for grades 3 through HS.Evaluations will take place in the Griffith HS Field House across from the tennis courts. Please show up for your time 15 minutes early in gym attire and do NOT bring any basketballs...

Below is the tournament schedule for Saturday, March 14th. Coaches, a few things for this Saturday. 1- Please note the start times for games this Saturday. 2 - We are on a time limit in the Field House, please arrive early to your games so that we can stay on...